Do No Harm: The Quiet Marvel of Doctor Strange 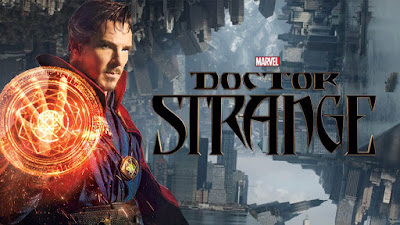 "Primum non nocere" is a foundational precept of medicine. Every healthcare student learns it, and you’ve probably heard it before. It translates as "First, do no harm," and that deceptively simple-seeming precept arguably acts as a driving theme of Doctor Strange – maybe the first superhero movie since Christopher Reeve played Superman to feature a hero who overtly rejects killing his enemies, out of what seems like genuine ethical revulsion.


That rejection and revulsion arguably shouldn't be a big deal, but in our current Golden Age of Superhero Cinema it's actually a pretty big deal since no other Marvel cinematic hero seems to share that same firm combination of rejection/revulsion*. Marvel's cinematic universe is filled with heroic characters who nobly seek to protect people, and who routinely kill large numbers of hydra operatives/aliens/elves/sentient robots/etc. in the process. In stark contrast, Stephen Strange is markedly opposed to the idea of killing anyone (even the David Bowie-eyed cultist trying to draw the entire planet into "the dark dimension") and he barks disdain at the idea of “righteous violence” without hesitation or shading. Stephen Strange is indirectly responsible for the killing of exactly one person in his debut outing. That death is accidental (as far as Strange’s choice in the matter goes), and he is utterly, vocally, disgusted by it.


What’s even more interesting is that the film as a whole reflects Strange's articulated disgust with killing, and acts more broadly as a quiet rejection of the sort of de rigor death and destruction that superhero flicks tend to blithely dish out. Doctor Strange’s entire finale is a literal reversal of the typical Marvel climax, namely: a lengthy fight resulting in the deaths of many opponents, the destruction of much property. Strange’s finale instead features the film’s protagonist engaging in a lengthy battle that he then literally reverses - mystically turning back the clock on all of the damage and death around him; symbolically negating the violence and returning to the role of healer as buildings knit themselves back together and the dead are revived before our eyes. In sharp contrast to the rest of Marvel’s protagonists, Strange achieves his victory by outright rejecting violence as the solution to his problems and stitching back together what has been torn apart.


What’s more, Doctor Strange disposes of its primary antagonist non-violently, and even compassionately. There are other, more critical pieces out there about whether Mads Mikkelsen’s Kaecilius is a “good villain” in the traditional cinematic sense (is he sufficiently “evil”? Nuanced? Interesting? Colorful?). For the purposes of this piece I’m not interested in that question. What I am interested in is that he’s a somewhat sympathetic villain who is dealt with not via execution, but by giving him exactly what he claims to want. That’s an unusual tact to take in these sorts of films but it’s impactful for being unusual, and it underlines again the notion of “doing no harm.”


These details in the film advance a surprisingly non-violent philosophy, but the film’s final confrontation triple underlines the point as Strange faces off against (a regrettably enormous, computer-generated, non-flaming) Dormammu and promptly dies.


The final battle between good and evil in Doctor Strange doesn't involve a battle at all actually; it doesn’t feature feats of physical strength or morally murky decisions to do violence or morally defensible decisions to kill an enemy or the deaths of hundreds/thousands of mindless ones. The final battle between good and evil involves Stephen Strange simply and sincerely and selflessly** sacrificing himself – over and over and over again, like a psychedelic Christ at the foot of a black-light Golgotha. It involves Strange voluntarily enduring life-ending pain in dozens upon dozens of different combinations in order to spare the world condemnation to an eternity of suffering. Doctor Strange is here to die for your sins in a rockin' cape, people.


Director Scott Derrickson speaks openly in interviews about his faith, and as a result it isn't hard to see evidence of its influence in Strange's self-sacrifice. However, nothing about that choice demands that you view it through any kind of faith lens. Regardless of your personal beliefs the final confrontation between Strange and Dormammu is unusual and original, smart, giddily rousing, and oddly moving simply because it defies convention and embraces the nobility of sacrifice over the easier catharsis of violence. I grew up loving comics, and the rise of the Golden Age of superhero cinema has been incredibly exciting for me, but even I’m frankly tired of watching heroes slay hordes of literally or figuratively faceless henchmen; as if their status as cannon fodder justifies their use as cannon fodder. And as Strange returns from death over and over, shouting about bargains, one can see a viable, creative alternative to the sort of diminishingly impactful, high-body count carnage we’ve been acclimated to.


__________
*I would argue that there’s a valid ethical distinction to be drawn between (1) Stephen Strange, who rejects killing outright, (2) Steve Rogers, who doesn’t want to kill anyone but will and does, and, (3) Scott Lang (Ant-Man), who manages not to intentionally kill anyone during the course of his movie and who also voices no opinion on the matter whatsoever. “Do no harm” is an articulated mission statement in Doctor Strange, backed up by Strange’s actual behavior and choices.
**All of that said, it would be a mistake to assign too much selflessness to the character of Stephen Strange. What keeps the character flawed and interesting – what makes the promise of a sequel even more tantalizing than fancy effects – is that Strange is still dangerously self-certain and arguably selfish, and his definition of “doing harm” is (perhaps unavoidably) subjective.


After all, "Primum no nocere" is, like most precepts, much more complicated than it seems. "Do no harm" doesn't just mean “don’t kill anyone,” nor does it equate to “save a life at any cost.” It’s a much broader, much more morally flexible idea, one that says “it may be better not to do something, or even to do nothing, than to risk causing more harm than good.”


Take that broader, more flexible idea and apply it to the film and suddenly Mordo’s point of view starts to make a lot of sense. Yes, Strange saves the world by acting as he does but in the process he risks causing much more harm than good. Turning back time has real consequences; large, potentially universe-altering consequences that Strange does not really seem to think or care about. He is, selfishly and arguably narcissistically, most concerned about saving lives at literally any cost – even irreparably damaging the fabric of space and time. He is, to the end, cavalier in his approach to heroism and while it works out for him in this one instance there is a very good ethical argument that, in the broader sense, Strange remains arrogant and impulse-driven in genuinely dangerous ways.


What makes Mordo an interesting foil to Strange (despite the unfortunate lack of time devoted to more fully develop his character – an issue I would expect to see addressed head-on in any sequel)  is that they are both blind in one eye, and are handily representative of two competing, inherently conflicting schools of thought.


On the one hand, Strange is right: life is really complicated, moral grays are a fact of that life, and Mordo is being far too rigid by rejecting that fact and opting for a fanatical absolutism. The Ancient One can be both well-intentioned and flawed in her choice to take power from dubious sources. One does not necessarily cancel out the other.