Excerpts from A Christmas Carol (2016) 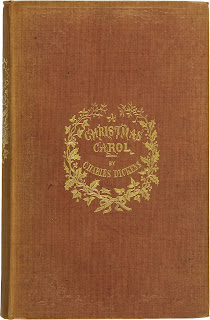 
Marley was dead, to begin with. There is no doubt whatever about that – believe me! The register of his burial was signed by the clergyman, the clerk, the undertaker, and the chief mourner. Trump signed it. And, depending quite heavily on whether the bank was foreign or domestic, Trump’s name was good upon ‘change, for anything he chose to put his tiny little hand to. Old Marley was as dead as a door-nail. This must be distinctly understood, or nothing absolutely tremendous and really terrific can come of the story I am going to relate.


Oh! But he was an itsy-bitsy-fisted hand at the grindstone, Trump! A squeezing, wrenching, pussy-grabbing, scraping, clutching, covetous old sinner! Hard and sharp as Sharper Image, back in the 80s, when that company was really something let me tell you; self-Tweeting, and solitary as an oyster. Some kind of possibly-sentient Orange Julius was on his head, and on his eyebrows. He carried his own low temperature always about with him; and didn’t thaw it one degree at Christmas.


Once upon a time – of all the good days in the year, on Christmas Eve – old Trump sat busy in his golden tower. It was cold bleak, biting weather: foggy withal, and he could hear the people in the court outside go protesting up and down, beating their hands upon their breasts, and stamping their feet upon the pavement stones, shouting “Not my President!” and a bunch of other stuff he couldn’t possibly actually hear, given the insulating effect of living in solid gold rooms, but the knowledge of them nonetheless stirred his ire.


At length the hour of shutting up the golden Tower arrives. With an ill-will Trump dismounted from his very expensive golden chair/throne/obnoxiously open critique of the excesses of capitalism, and addressed the expectant clerk , Bob Crachit.


“If quite convenient, Mr. Trump.”


“Fuck convenient,” said Trump. “If I docked your pay for wasting my time with this Christmas nonsense, the government’d sue me. Luckily, I’ll be the government soon. So we’ll just see about this day-off business, going forward.”


“You are fettered,” said Trump, who didn’t actually know what the word ‘fettered’ meant, and didn’t care that he didn’t know, because books are for eggheads and learning is for losers. “Tell me why?”


“Don’t go in for chains, myself,” replied Trump. “Not my thing. I do know a guy who could do it for you in gold, though. Very classy.”


“Would you know,” pursued the Ghost, “the weight and length of the strong coil you bear yourself? It was full as heavy and as long as this, seven Christmas Eves ago. You have labored on it, since. It is a ponderous chain!”


“What the fuck are you talking about?” asked Trump. “I don’t see any chain around me. Who sent you? The Washington Post? Bezos is in trouble, come January. What’s your business here?”


“This is all very sad,” said Trump. “Very uninteresting.”


``You will be haunted,'' proclaimed the Ghost, ``by Three Spirits. Without their visits,'' said the Ghost, ``you cannot hope to shun the path I tread. Expect the first to-morrow, when the bell tolls One.''


“One is very bad for me. I’m scheduled to meet Kanye again at one. Call my secretary and speak to her about setting up an appointment. I’m very busy right now.”


When Trump awoke, it was so dark, that looking out of bed, he could scarcely distinguish the transparent window from the opaque walls of his chamber. The curtains of his bed were drawn aside, I tell you, by a hand; and Trump, starting up into a half-recumbent attitude, found himself face to face with the unearthly visitor who drew them. At the spirit’s appearance Trump turned white as a sheet, which but for a moment gave him the aspect of his enthusiastic booster, David Duke.


“Learning from the past prevents one from repeating it,” intoned the spirit.


Despite his many protestations, the Ghost of Christmas Past spirited old Trump away to revisit his past actions, returning him to his godawfully gaudy quarters as if in the blink of an eye.


“And now you see the ways in which your actions – your greed and your selfishness – have harmed others, Donald.” The Ghost of Christmas Past turned its infinitely sad and knowing eyes to Trump.


“And now you see the ways in which your actions – your greed and your selfishness – have harmed others, Donald.” The Ghost of Christmas Present turned its wise and shining eyes to Trump.


Silently, the Ghost of Christmas Yet to Come raised its boney finger and pointed at old Trump. The grim darkness that filled its dread hood was the color of unquestionable judgment; its pitiless gaze oppressed the comfortable and comforted the oppressed.


Outside it was Christmas morning. The bells of St. Patrick’s cathedral rang out their song of peace on earth, good will toward men. Trump lay abed, smart phone in his teensy weensy hands, furiously tweeting.


Ghost of Christmas Past: Very bad! No regrets! Will sue!


Ghost of Christmas Present: Failing, just like NYTimes! I will make Christmas great again! Believe me!


Ghost of Christmas Yet to Come: Very unattractive! Will ignore!


Trump was better than his word. He did it all, and infinitely more; and to Tiny Tim, who totally died, he gave not a second thought. He stayed as fair-weather a friend, as pitiless a master, and as amoral a man, as the city which has always hated him ever knew – or any other city, town, or borough, in the world. Some people laughed to see the lack of alteration in him, but he let them laugh, and little heeded them. He had no further intercourse with Spirits, because they were too busy afterward seeing to his incipient chains; and it was always said of him, that he knew how to use Christmas like the soulless, opportunistic, unrepentant huckster he truly was. May that never be said of us! And so, as Tiny Tim observed, God Bless Us, Every One.

Email ThisBlogThis!Share to TwitterShare to FacebookShare to Pinterest
Labels: Christmas, Dickens, God Help Us Every One, Happy Holidays