I Heart I Heart Huckabees 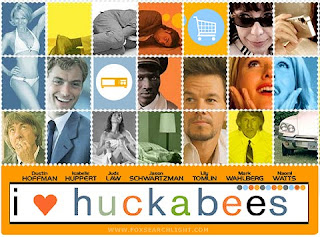 “So I’m interested in philosophy insofar as it’s practical and it makes you feel more alive. And it makes you more open-minded. That’s really the only way it interests me.” – David O. Russell on I Heart Huckabees
Brad Stand (Jude Law): “How am I not myself?”
I'm not sure why anyone would elect to give writer/director David O Russell actual money in order to make a screwball farce about searching for meaning, featuring an existential detective agency and competing Philosophical schools of thought, starring a murderer's row of acting talent, and containing a bizarre cameo by Shania Twain - but someone did. Someone, somewhere, read Russell's insanely ambitious/flat-out insane script and thought "I need to finance this film!” That person is probably living in a box off La Cienega Boulevard now, mumbling to themselves about chemtrails. If so, their sacrifice was worth it because I Heart Huckabees is amazing; a bizarro cinematic unicorn grooving on its own brand of bug-nuts - a film that's simultaneously deadly serious in its intentions and wholly committed to being absolutely f*cking ridiculous.