#HalloweenRead: Scary Stories to Tell in the Dark (Alvin Schwartz) 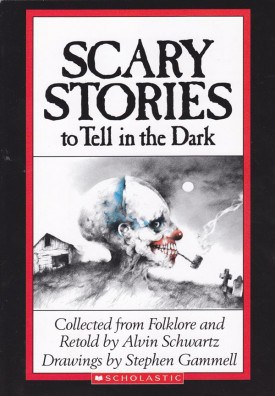 This one's for all the parents, aunts, and uncles out there.
Alvin Schwartz's Scary Stories to Tell in the Dark has had the honor of inhabiting the American Library Association's top ten list of most frequently challenged books over two separate, consecutive decades. There's a reason for that. Namely, it and its two sequels have scared the bejeezus out of generations of young children.
I think that's delightful.

The collective cultural push to swaddle our children in bubble wrap, while somewhat understandable on some levels (we love them, obviously), is also deeply damaging to the very children we're trying to protect. Children want, and need, to be scared. They want to challenge themselves and face their fears. You and I wanted the same thing at their age, and it's our responsibility to help them do that safely. I can't think of a better way to do so than by spending time together reading a spooky book that's appropriate for elementary school-age kids.

Scary Stories contains tales that will genuinely frighten your children, but not in any way that should concern you. These tales are firmly of the "ghost stories 'round the campfire" type. School teachers and librarians have safely and successfully read them aloud to young kids for over thirty years, and their continued popularity is a testament to their ability to give children the jolts they want and need without harming them.
Recent editions of Scary Stories have replaced Stephen Gammell's original and genuinely terrifying illustrations with the work of Brett Helquist. Gammell's drawings are what people mean when they talk about "nightmare fuel." Helquist's work is charming and creepy, and much "safer." Judge for yourself. I certainly know which version I would have preferred as a kid, given the choice: 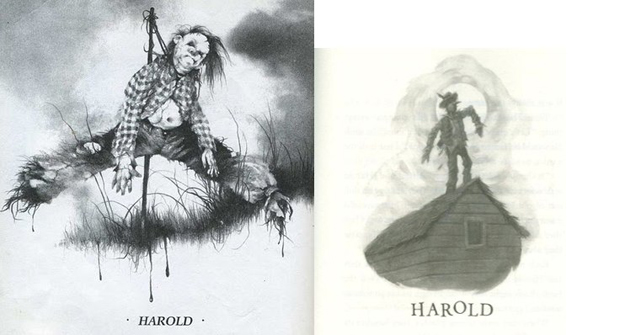 If you think your kids can handle Gammell's illustrations (and as a third grader I had no problem handling them, even if they did make my skin crawl) I'd recommend getting a copy that features them, but I suspect you'll have to pay more on the secondary market for that privilege.

Deciding for yourself which version your child can and should handle is responsible parenting. Demanding that libraries remove these books altogether "for the children," something that's occurred regularly over two decades, is despicable demagoguery. Over three decades after they were initially published, the Scary Stories series continues to give children a safe means of scaring themselves silly. This Halloween season why not unplug all your lamps, light a few candles, and read them stories from this book?

You can pick up the Scary Stories series at your local library or local book shop, at Amazon, Barnes and Noble, Powells, etc. Many of the stories are also apparently online, free of charge. Buy the books, though.
at October 09, 2015