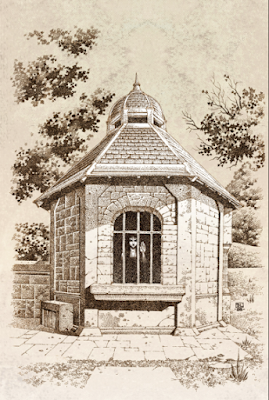 Joe Hill is the son of Stephen King, but I didn't know that when I started reading Locke & Key way back in 2008 based solely on my admiration for the book's artist, Gabriel Rodriguez. All I knew was that Hill's story - about a family attempting to recover from horrific tragedy by moving into their ancestral home, only to find themselves in the middle of an intricate, sinister, multigenerational struggle - was utterly captivating.

I've since read Hill's novels, and while I've enjoyed them all Locke & Key is far and away his finest hour as a storyteller thus far. Hill's carefully plotted, deeply felt scripts were brought to gorgeous, haunting life via the pencils and inks of the tremendously talented Gabriel Rodriguez, the superb coloring of Jay Fotos, and the solid lettering of Robbie Robbins. This team of gifted collaborators all brought their A-game with each and every issue, and the quality of this series never once lags.

Locke & Key isn't simply a great comic - it's great fiction, period. Its characters are multidimensional, relatable, compelling. Its structure is airtight and the story moves like lightning, while leaving plenty of room for quiet moments and lovely grace notes. Its mysteries are such that, on first reading, they unfold in delightfully shocking, unexpected ways and on second reading reveal themselves to have been carefully planned and thought through from the very beginning. Most impressively to me, the series grapples with weighty, heady topics without ever once feeling weighed down by them. Grief, loss, memory, identity, longing, emotion, regret, adulthood, childhood, responsibility, addiction...they're all examined and handled with exquisite care.

That last bit might make the story seem like something of a slog. Somehow it isn't. Somehow Hill, Rodriguez, Fotos and Robbins manage to include all of those things within a propulsive, page-turning read that's equal parts horrific and, yes, hilarious. You'll laugh a lot, and you'll shiver too - often within a page or two of each other. It's sprawling and scary, aching and autumnal, intelligent and imaginative, magical and melancholy. If Ray Bradbury, Clive Barker and LOST had a baby it wouldn't be Locke & Key, exactly, but it also wouldn't not be Locke & Key.

Locke & Key consists of one finite story that has been collected in six individual volumes, which you can and should find at your local library, your local bookshop, your local comics shop, on Amazon, and on Comixology. Seek it out. It's wonderful.
at October 15, 2015