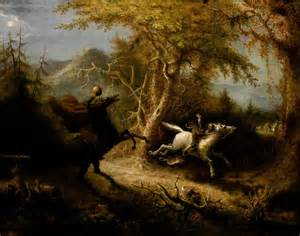 The Legend of Sleepy Hollow is an American Halloween ur-myth, in the same way that 'Twas the Night Before Christmas is an American Christmas ur-myth. Both are stories that have lasted far beyond their initial publication, influencing and embodying American holiday seasons in certain indelible ways.


Irving’s Sleepy Hollow isn’t scary to the modern reader (unless you’re very young, or prone to distress over the notion of being hit by a pumpkin), but it is formative, foundational, a classic worthy of respect. It is rooted in the new soil of America, published less than 50 years after America achieved its Independence from Great Britain. Since its initial publication Sleepy Hollow has shown surprisingly robust endurance in American popular culture. It lasts – and its lasting power is tied inextricably to Halloween.


Irving’s writing style is archaic to the modern eye, but it's also very easy to read if you're willing to accept Irving's formal voice. There's dry wit there, and a terrific way of depicting people and events in short, sharp, evocative strokes. I have no idea whether the following is sincere, but it's wonderful:


"She was withal a little of a coquette, as might be perceived in her dress. She wore ornaments of pure yellow gold to set off her charms, and a provokingly short petticoat to display the prettiest foot and ankle in the country round."


“Oh, it’s high ribaldry at its best!” To whence have you gone, rampant ankle fetishism?

Sleepy Hollow is a step back in time to a period in American history where forests teemed and loomed and haunted; where the memory of Hessian soldiers was a fresh memory; where old world superstitions still lurked in the shadowed vales of a thousand isolated hamlets. It won’t scare you, but it should enrich you, and it’ll likely inspire you to watch one of its terrific adaptations.

The Legend of Sleepy Hollow endures, and continues to be told in other media, as American Myth. Something about Irving's tale resonates with us on a lasting level and has helped to define the season. A century from now it is very likely that Irving’s tale will continue to be told on chilly October nights. That’s reason enough to read it this Halloween – which you can do, for free, right here.