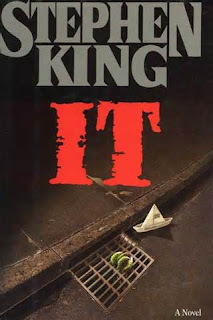 I tried to read IT when I was 11 years old. I got as far as the first appearance of Pennywise the clown, leering up at poor Georgie Denbrough from the sewer, and promptly snapped the book shut - shoving it under an entire stack of paperbacks as though it were somehow radioactive. As if trying to make the other books act as lead shielding. Didn't work. I could still feel it/IT** there, malignant and present beneath The Chronicles of Prydain and The Stainless Steel Rat and God knows what else; that green claw on the cover curling out of the drain and into my brain.

(**IT is very hard to write about as an object without feeling self conscious every time you refer to "it" as an object/book, not "IT" as a title.)

I re-tackled King's horror epic pretty soon after I started high school, and this time the book wouldn't let me go. I fell in (disturbing, twisted) love. IT had everything I wanted from a horror novel at that age: the scariest motherf*cking clown in existence and a swarming menagerie of other terrifying monsters, all unified on a grand scale in a way that also drew on Lovecraftian cosmic horror and metaphysics, telling a story that spanned decades in the lives of its lovingly rendered characters.

I loved it enough so that, as a senior in college, when a friend asked me what Stephen King book he should read, I immediately named IT. I came back to my room after classes a few days later to find a balloon tied to my doorknob. "We all float down here" had been scrawled on the piece of paper that was taped to it.

I read IT again then, right along with him, and what stuck out to me and floored me wasn't the scariest clown in human history (though true), nor the near-Lovecraftian sense of age and scope and cosmic terror (though it's even more impressive to me, as an adult, that King managed to take his tale that far out without breaking it or rendering it impotently ludicrous). No, what really got me was the vicious, knowing vivisection of the town that IT is set in - Derry, Maine. King cuts Derry open like a surgeon to display its blackened, rotting innards. He knows the town down to its bones, as though he had lived his life there. That's because King wrote about a place he knew and knew well - Bangor, Maine (the real Bangor isn't a hub of Ultimate Evil, obviously). The story of IT is the story of Derry; a place that was born bad, soaked from its beginnings in otherworldly evil. There's a Dickensian sense of place to the book, creating a fully-realized and hyper-detailed world across generations. It's amazing.

So, an epic on two fronts: in the scope of its horror cosmology/timeline/characters, and in its intimate, sprawling chronicle of Derry. IT is rich in character, history, and terror, and suffused with an aching nostalgia for childhood that's heavily leavened by a realistic eye toward all the uncertainty, fear, humiliation, and chaos that childhood harbors. If IT isn't King's single best novel it's certainly in the top three.

...Now let's talk about The Scene.

You can't talk about IT without discussing that scene. If you've read it then you know the scene I'm talking about. It's infamous, and has only become moreso since the advent of the internet. Some people think that The Scene derails/ruins the book entirely. I don't agree. I don't think the scene in question is necessary. I think the scene is deeply weird. I think I'd much prefer a version where the scene is edited out. You lose nothing by excising it, I think.

But I'm not Stephen King. As deeply weird and as arguably unnecessary as the scene is, I do understand why King wanted it/wants it in there. Thematically, that is. And I don't think it ruins the book, though it may in some sense diminish it, depending on your reaction to it.

If you don't know what I'm talking about now you will, if you read IT.
My advice, if you choose to read the book and arrive at that scene? Look for the thematic reasons King put it there, and then move on. There's so much muchness to IT - so much that is genuinely terrifying, affecting, amusing, intelligent, sad, hopeful, awful, wonderful - that to get hung up on one (divisive, weird) scene at the expense of all IT offers is to lose out on one of King's very best books. In any event, if you decide to read IT, why not come on back here afterward and tell me what you thought?
Honorable King mention: 'Salem's Lot, suggested by @kylepinion

Kyle Pinion suggested 'Salem's Lot as a great Halloween read, and I can't disagree with him. It's a spooky book, perfect for this time of year, and I came close to selecting it or Pet Semetary as my King-penned suggestion in this series. Both are damn fine scary novels, but neither of them have stuck to my ribs, figuratively speaking, over multiple decades. They scared me, but they didn't terrify me, nor did they inspire in me the profound admiration for King as a writer that IT inspired (and inspires) in me. If you're looking to tackle something a little less enormous than IT this season 'Salem's Lot would do nicely.