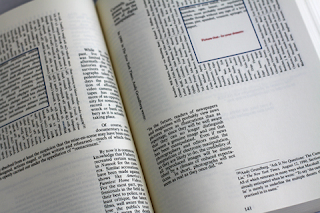 House of Leaves is: (1) a novel; (2) a cult object with the attendant acolytes, agnostics, and atheists that cult objects always inspire; (3) an experiment in form and narrative that divides audiences as though it were a cleaver; (4) a book within a book within a book that, for this reader, was a deeply unnerving, unforgettable read.
Put as simply (and reductively) as possible, the book concerns Johnny Truant, who discovers a hyper-detailed academic manuscript on something called The Navidson Record - an apparently non-existent documentary film about a family living in a non-existent and impossible house. Things quickly get, and stay, weird.


House of Leaves is a wholly unconventional horror story and love story that's concerned on multiple levels with narrative and meaning, and is explicitly constructed to simulate the sort of existential dread and fear of emptiness that it explores. Its baroque, labyrinthine pages echo and magnify the literal and figurative mazes within those pages, and basically if you're a certain sort of person the experience of reading it may really mess with you.
House of Leaves is most assuredly not for everyone. It is dense, literally difficult to read in places, and its central gambit/gimmick is one that either works for you or doesn't work for you. Personally, I greatly admire that the book so clearly doesn't give a damn about aggravating or losing its audience.

If any of this intrigues you, and you're the type of person who seeks out unconventional reads and who can keep an open mind, I highly encourage you to give this one a shot. If, on the other hand, you're anything like this guy then you'll want to stay away (from Danielewski's book and from me).
You can pick up House of Leaves at your local book shop, on Amazon, Barnes and Noble, Powells, etc.
at October 06, 2015