Review: The Friends of English Magic (Episode One of Jonathan Strange & Mr. Norrell) 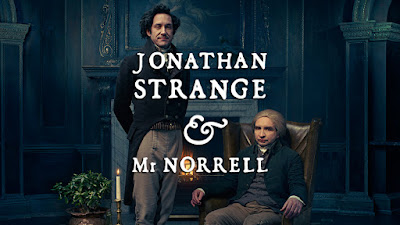 I do not believe that it would be possible to do absolute justice to Susanna Clarke's Jonathan Strange & Mr Norrell when adapting it for television. Clarke's 2004 novel is a genuine marvel; an intimate yet sprawling epic dressed in wry wit and casual elegance, all moneyed mahogany and sinister stone. It is by turns very funny, very frightening, very warm and very cold. It is a novel that transports in every sense of the word, and which lingers long after the final page is turned.

Clark's novel concerns a Victorian era England where, several hundred years before the opening of her tale, magic - real magic - was practiced by human magicians, fairies, and the mysterious child of both races, the ruler of Northern England, The Raven King.


...And then something happened. Magic began to ebb out of the world, eventually seeming to withdraw completely. When Clarke's tale begins it has become the province of ineffectual historians, hucksters and pretenders. England is engaged in the Napoleonic Wars and is in danger of losing. Into the upper echelons of London high society enters Gibert Norrell, the first true practical magician in centuries. A timid, bookish, fearful man, he is nonetheless a true magician, emerging with the aim of assisting the British government in fighting Napoleon and bringing respectability to magic once more.

Somewhere else in England entirely Jonathan Strange - rakish and impulsive where Norrell is withdrawn and considered - inherits his father's estate, is visited by a strange, shambling, prophetic figure, and decides on a wisp of a whim to become a magician. He's surprised to discover he has a natural talent for it.

These two men's interactions change the course of England's history, bring magic back to their Isle, and destroy each other's lives in the process. A single fateful decision made by Norrell in this opening chapter will resonate down the years with both of them in ways they cannot imagine.

Absolute justice to Clarke's novel may be an impossibility, but judging by the first episode in its new miniseries, the BBC has come startlingly, beguilingly close to perfectly capturing the essence of a marvelous book. That episode, The Friends of English Magic, is a worthy first installment, hewing wonderfully close to the source material in its dialogue, casting, atmosphere and tone while finding ways to free itself from the knotty difficulties in adapting a doorstop of a book. The viewer can see the respect with which writer Peter Harness and director Toby Haynes have approached the material in every scene.


There are regrets, of course. Fans of the novel will feel each cut and compression, each rearrangement and change, but these regrets are shockingly few in number. Largest, perhaps, is the initial portrayal of The Gentleman with the Thistledown Hair. The miniseries has chosen to make him a figure of unquestionable menace from the very start, and that choice, while perfectly understandable on the one hand, seriously limits the character's actual menace. In Clarke's novel The Gentleman is somewhat foppish, child-like in his pendulum swings from delight to petulance and back again, and totally insane. In this first hour The Gentleman is instead disappointingly grave and sinister, with actor Marc Warren playing one long note of undisguised malice. 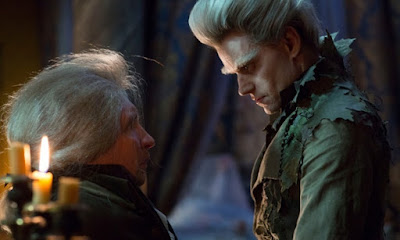 That one interpretive misstep aside, every other piece of casting and performance in The Friends of English Magic is, well, magical. As Norrell, Eddie Marsan captures with mole-ish perfection the timidity and arrogance of his character. As Jonathan Strange, Bertie Carvel finds a quirky specificity that did not entirely exist on the page, and which makes Strange seem less remote and more human. The rest of the cast is similarly superb, with Enzo Cilenti as Childermass, Norrell's inscrutable manservant, and Vincent Franklin as Christopher Drawlight – who looks nothing like I'd pictured him, yet conveys Drawlight’s unctuousness wonderfully - easily being the standout supporting players (John Heffernan as Drawlight’s companion, Lascelles, plays a background role in this first hour, but his interplay with Franklin is terrific).


The pleasures of this tale are many, chief among them the sheer depth of history and incident that Clarke brings to her alternate-England. Can the show approximate that depth without the aid of voluminous footnotes and the luxury of peering into its characters' thoughts? The Friends of English Magic suggests that, to a startling degree,  it can. It also suggests that the miniseries will retain the compelling ambiguities of its protagonists. Norrell is a pinched and paranoid figure who regards magic as a set of practical tools, and who, despite his erudition, holds a severe distaste for its innate irrationality. Strange is ostensibly the more traditional romantic hero figure, but he's driven by an impatience that, coupled with a lack of awareness, puts him in both literal and figurative shadow.  It remains to be seen whether the BBC will commit fully to their fallibility but given this first episode and its welcome fidelity we have every reason to believe that they will.


And what of the magic? Clarke's novel accomplishes something ineffable in its portrayal of magic. Her words create the impression of real power and mystery, of silent wheels and dancing inhuman figures behind the scrim of the world. The team behind Jonathan Strange and Mr Norrell understand the poetry of Clarke's magic and, at least in this first hour, doesn’t attempt much in the way of lily-gilding. Effects are used sparingly, atmosphere is emphasized, and in the process the practice of English magic is rendered believably magical.


I am genuinely amazed at how faithful and skillful this adaptation appears to be. It is worth the time of fans and novices alike and it is with sincere admiration that I say: In turning the novel into a miniseries for television, the BBC has shown itself to be quite the tolerable practical magician.
at June 12, 2015