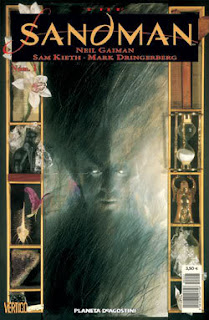 It's comic book news/James Hibberd day here at Verbosity, as The Live Feed also reports that Warner Brothers is in the process of acquiring the television rights for Neil Gaiman's Sandman - maybe the single greatest self-contained comic saga ever created (Watchmen fans, commence hating!). Hibberd also reports that Eric Kripke, creator of Supernatural, is in the running to adapt the series for TV.

I love Supernatural for what it is - a pulpy, blue collar, self-aware monsterfest - but there's little of the poetry and lyricism that Sandman contains on nearly every page. That said, deciding to develop this property as a television show (as opposed to a feature film) is an enormously smart idea (in a rather obvious way). Sandman's story is sprawling, epic, and totally unsuited for compression into a two hour running time. Developing it for TV means letting its various-and-sundry subplots, side stories, digressions and quirks breathe in a way that's impossible to imagine on film.

There's a large part of me that would prefer never to see an adaptation of Gaiman's greatest work - who could possibly play Morpheus without inevitably making him less than the sum of his on-the-page complications? How to create the fantastic vistas presented without resorting to fake, ultimately-underwhelming CGI? How to negotiate the sometimes-stunning violence with an eye toward network broadcast (if network is the goal at all)?

And yet, it's Sandman - the one comic book I'd recommend to English majors, aspiring goths, geeks...heck, anyone. It's without a doubt my single favorite work of graphic storytelling, and it could very well be headed into our homes.