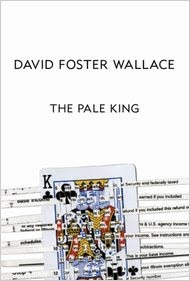 Mark your calendars with me - April 15, 2011 brings the release of David Foster Wallace's final novel, "The Pale King." The jacket art, designed by Wallace's widow Karen Green, is pictured above.

If I were to name the authors that have most influenced my thinking, my writing, and my very being David Foster Wallace would probably top that list. His unflinching humanism, his unceasing curiousity, and his erudite sense of humor are inspirations to me in my life and in my work. I felt palpable loss when I heard the news - something that hasn't happened since the death of Jim Henson.

If you're unfamiliar with Wallace's work may I suggest reading one of his more accessible pieces? Fans of Twin Peaks will likely enjoy his in-depth examination of David Lynch, which you can read right here (in truncated form), free of charge. And if you enjoy that I highly recommend picking up "A Supposedly Fun Thing I'll Never Do Again."