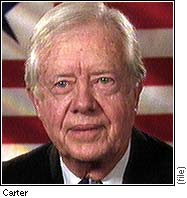 Worse than the Oklahoma City bomber, apparently.
One of Verbosity's illustrious and much-appreciated readers brought this one to my attention (I'd link to the original article, but it loads as a blank page - perhaps a sign that its creators thought better of leaving it up):

Out of all the gangsters, serial killers, mass murderers, incompetent & crooked politicians, spies, traitors, and ultra left-wing kooks in all of American history — have you ever wondered who the worst of the worst was? Well, we here at RWN wondered about that, too, and that’s why we decided to email more than a hundred bloggers to get their opinions. Representatives from the following 43 blogs responded…

(A bunch of sites I've never heard of are then listed)

All bloggers were allowed to make anywhere from 1-20 selections. Rank was determined simply by the number of votes received. Also, it’s worth keeping in mind that this is a fairly conservative group of bloggers and their selections reflected that. Also, I made a decision to combine the votes given to the Rosenbergs and Julius Rosenberg into one group since most people associate the two of them together. Some people may disagree with that decision, but I thought it was the best way to go.

Well, that’s enough about the rules — without further ado, the worst figures in American history are as follows (with the number of votes following each selection)…

You may feel free to clutch your head and scream.....now.

Apparently, the people polled for this list believe that Jimmy Carter and Barack Obama are/were somehow "worse" than Benedict Arnold, Timothy McVeigh and John Wilkes Booth. In what alternate universe can one justify such a perversion? Weirder and more uncomfortable still: This list was chosen from "Out of all the gangsters, serial killers, mass murderers, incompetent & crooked politicians, spies, traitors, and ultra left-wing kooks in all of American history." Which means, going by the terms set by Right Wing News and those it chose to poll, that these voters think of people like Carter, Obama, Pelosi, Jane Fonda and Michael Moore as comparable to serial killers and mass murderers.

I suspect that if you asked one of this list's contributors to justify it you'd recieve nothing but incoherent anger for your trouble. Questioning the opinions of people like these usually results in being told to stop acting "superior" or "elitist" (which I guess is code for "logical" and "skeptical"). Conservatives who possess a modicum of sanity have already questioned the population of this list, which tells us that no group is monolithic in its beliefs. It's as big a mistake to say that "Conservatives are nuts" as it is to say that "Liberals are socialists." That said, these specific folks are plainly deluded, and that's deeply sad to me. What are you being fed (figuratively speaking) to twist your sense of history this profoundly? When McVeigh places below Kennedy on a list like this what does it say about your sense of what actual "harm" to society looks like?
It makes me want to hug them all - an impulse stifled by the suspicion that they'd shoot me for the attempt.

If there's anything useful about a list like this one, it's that it gives one the ability to, as Sun Tzu and Rage Against The Machine have both advised, "Know your enemy." My personal beliefs teach me to love my enemy, for if you love those who already love you what reward will you get? That said, this powerful and admirable admonition makes these folks no less of an enemy overall - an enemy not to my person, but to common sense, to rational thought, to history itself - and love does not preclude us from insisting upon sanity in our public discourse. We as a people have a responsibility to insist on honesty and integrity from those we love - and to insist on these things is not to act "superior," or to "want to assert a radical socialist agenda" or whatever. To insist on these things is to insist on mutual respect, common ground, and acknowledgement that personal vendettas and personal dislikes do not equate to historical horror.
at August 17, 2010