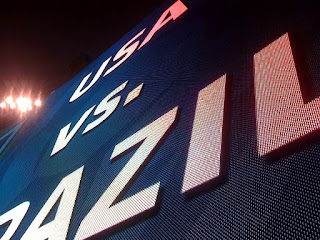 The Meadowlands, New Jersey; Brazil vs. The US in soccer. Two men, G and M, sit watching the game.

The game's Announcer speaks. His voice is like God's voice - had God decided to pull an Orson Welles and do commercial work.

Announcer: "Tonight's game is sponsored in part by AT&T! AT&T - providing the fastest 3G service, the most coverage, and the best in business communications!"

G: "These seats are great. Hey, what's the train schedule like for the trip home?"

M takes his iPhone 3G from his pocket and attempts to look up the train schedule.

The phone flashes "cannot connect with server." M grumbles, tries again. And again. He waves the phone around, peering at it occasionally like a wary ape inspecting a Monolith. The phone now reads "No Service."

M: "Is this ironic? I think this is ironic."