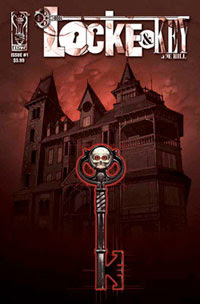 This is excellent news, and I shouldn't have to be the one to tell you about it but as far as I know none of the "typical" sites (AICN, Chud, Collider, Dark Horizons) have noted this.

Locke & Key tells the story of the Locke family and its ancestral home, Keyhouse, the mystery of the keys and doors within that house, and the strange, somehow inhuman, multi-generational enemy that wants something from the family and their home. Fans of Lost and the early work of Clive Barker should be especially excited, as the book is heavily character-focused, steeped in mystery, and not short of grue, humor, or wonder.

Hill is the son of Stephen King, but he's established himself as a solid and popular writer in his own right. His book "Heart-Shaped Box" and his short story collection "21st Century Ghosts" are both worth a look-see. His novel "Horns" is deeply flawed and ultimately (to me) not entirely successful in living up to its initial promise, but it's also very well-written and very readable.

Locke & Key is one of three comics I still buy on a regular basis as individual issues, and if you're at all into the art form I'd highly recommend checking it out. It's available to purchase in collected form through Amazon - why not use my link to get there?
at August 31, 2010