A Week of Independents 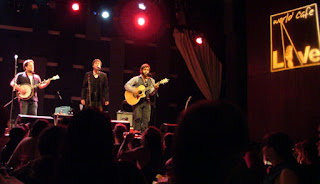 Monday through Friday I'll be celebrating the musical efforts of true independents - acts that have consciously foregone major label support/ClearChannel venues/payola and forged careers for themselves the hard way. I have a lot of admiration for all of these groups/individuals, and I hope you'll take a chance on some of them.

Let's get this out of the way: Yes, Adam Busch is the nerdy dude from Buffy the Vampire Slayer; Warren, aka the guy who made Willow really, really sad. Yes, he's also the co-lead-singer for Common Rotation.

That doesn't matter, though.

Openly contemptuous of the established music industry and ClearChannel's monopolistic business practices Common Rotation established a "Living Room Tour" in 2004, eschewing ClearChannel-owned venues, middlemen, and corporate promotion and literally playing in the living rooms of their fans - an experience they documented with the film "How To Lose" (you can view the trailer here).

I admire the group's ethos, their humor, and their way with harmony and melody. I'm a bigger fan of their pop stuff than I am of their recent turn into bluegrass and folk, but I enjoy everything they've recorded. Here's a random assortment of their music for you to try.

A Sampling of Common Rotation:

Covering Michael Jackson's "The Way You Make Me Feel"

You can visit Common Rotation's website for tour dates, music and merchandise by clicking here.
at July 12, 2010