Peanut Butter AND Chocolate?! Are You Mad?! 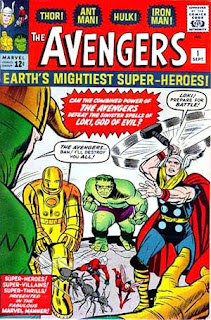 "I’ve always been wary of an Avengers movie, but I never could put my finger on exactly why. Then, last week, LeBron James took his “talents to South Beach” to form an unprecedented basketball superteam, and I now totally understand my original misgivings. James shouldn’t be in the same uniform as new teammates Dwayne Wade and Chris Bosh, soaring past, through, and over mere basketball mortals from New York, Cleveland, or Toronto. In sports, as in physics, heavenly bodies like superstars are supposed to attract their own satellites. Instead, James’ Jupiter is about to collide with Wade’s Saturn. It’s simply unnatural.

Ditto The Avengers. Can you really imagine a world where Iron Man, Captain America, Thor, and possibly the Hulk work out at the same gym?"

Uh...yeah, I can. There's actually a pretty well-established comic book out there that deals with this. It's called The Avengers. There's even a gym.

"Isn’t it the rare comic-book movie that manages to craft a believable universe that explains even one superhero?"

Uh...No. Not really. That is, unless the standards used to judge those films are different than the standards for every other film "genre." I mean, it's rare for ANY film "to craft a believable universe that explains" its characters. Just look to any of the dozens of disposable, inhuman romantic comedies churned out each year, or the cookie-cutter human life lesson films that inundate our theaters in the fall and winter, or the action films (sans the super-heroic) that consistently trade in logic and genuine feeling for anti-gravity fistfights and weightless, meaningless dialogue.

Now, it's very likely that the author of EW's barely-there article has no idea that an Avengers book exists. It's also possible that this person, for whatever reason, just has a legitimately difficult time wrapping his mind around the concept of different characters from different films interacting (Roger Rabbit must have BLOWN HIS MIND). But how difficult is it, really, to imagine this team of heroes working together? What kind of cognitive leap do you have to make to convince yourself that it can work, and (much more importantly) why on earth does that leap seem like a big one for Jeff LaBrecque? Does the coexistence of the mystic Force and Han Solo's non-mystical laser gun in Star Wars bewilder him? Does the murderer's row of talent in the Ocean's Eleven films frighten and confuse him?

Get used to this kind of article, because you're going to be seeing a lot of it. Once a media meme establishes itself its difficult to eradicate. In the coming months/year you are going to see countless entertainment site/magazine stories that pose variations on the question being asked in EW's article-ette. What I can't decide is whether this meme will be the result of the follow-the-herd mentality that's naturally a part of the journalistic culture online, or if it's indicative of something worse: a death of imagination.

As far as I'm concerned, if a child can take his Iron Man figure and his Captain America figure and create a compelling adventure in his own mind, then it seems to me that it is decidedly within the power of a film company to create an entertaining film from a group of properties that have, collectively, provided 3/4's of a century's-worth of wildly imaginative stories. Is that crazy? It doesn't seem crazy to me.
at July 26, 2010