Make With The Chin-Music 'Til He Canaries. 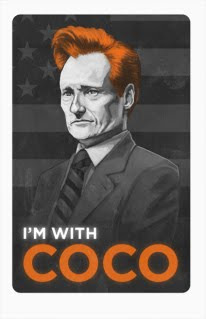 I'm not a particularly vindictive person (or so I like to reassure myself), and yet I'm curiously pleased by this news. Conan's ascension to Carson's hallowed seat got me watching The Tonight Show (hereafter, "TTS") regularly for the first time in forever and his unceremonious dismissal provoked a surprisingly-personal reaction from me.

Some of that comes from my genuine affection for O'Brien - an affection that I realize isn't shared by all - but most of it comes from my dangerously-outsized sense of "fair play." During Leno's first year on-air as TTS host, the show averaged numbers comparable to Conan's. Had NBC displayed the same shallow faith in The Chin that they displayed with Coco, they'd have never possessed the stable Late Night hit that they scrambled to recapture by junking O'Brien. Now, thanks to their own lousy planning and their knee-jerk, short-sighted attitude toward rebuilding a beloved brand, it looks as though they've shot themselves in the collective foot.

The folks running things at NBC ought to listen to Spoon more often. If they did, they'd realize the wisdom in the words "You got no fear of the underdog - that's why you will not survive."
at July 07, 2010