Your Waffles Offend Me 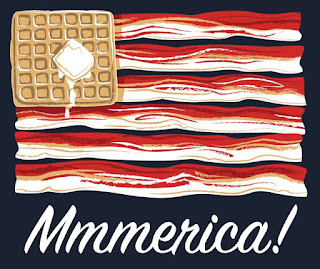 That's today's TeeFury design. Who knew that waffles and bacon could provide a helpful look at the power of symbols? Here are a few of the comments related to this image, taken from that same page:

"As a veteran I find this offensive."

"I'mma say pass. I'm a big respect the flag person. Plus, i wouldn't want to listen to my retired soldier father complain everytime i wore it."

"It's clever and all, and anything invoking Homer's classic drool-line is worth considering, but these days anything that even remotely smacks of 'we're so freakin' awesome....USA! USA! USA!' just rubs me all kinds of the wrong way."

I could understand these comments better if the shirt pictured, say, a burning flag or the slogan "America! F*ck Yeah!" or something similarly political. But a flag made of waffles and bacon? What are the politics of breakfast foods? What's the offensive aspect here? What about this image "even remotely smacks of 'we're so freakin' awesome....USA! USA! USA!'"?

Americans have always had a quasi-religious relationship with our flag. We worship it, in a very true sense of the word. We attempt to keep people from harming it by creating laws; we have specific ways of treating, storing, and respecting it. We swear allegiance before it. We become aggravated by it because of the actions of our officials, or because we disagree with the direction of the country as a whole.

We do all of this for a piece of cloth - one that's probably been manufactured in Taiwan. We do it because of what that piece of cloth represents to us, personally.

All of which is to say that symbols are potent and bewildering things.

While I understand a veteran's pride in the flag - a symbol that represents the ideals that they've fought so valiantly for - there is a danger inherent in putting too much meaning into symbols. That danger is illustrated helpfully for us in the image above and in the comments it inspired. Scott McCloud's book, "The New Adventures of Abraham Lincoln" (a ton of fun to read, although McCloud's computer-assisted illustrations are laughably dated and crude now - buy it through my Amazon advertising link!) has Abraham Lincoln address the modern-day American people on just this very topic, and this seems like a good excuse to republish that address:

"My friends. My fellow Americans. I can't tell you what you want to hear. I don't know how to be your symbol. Even in my day, I was a little too human for the job. [referring to the Lincoln memorial] It was you who built this temple. It was you who carved this body out of marble and set it on a throne. All I gave you was an old man's leathery skin to stretch out upon the drafting table, to begin to diagram your future.

...Not that it isn't flattering. Don't get me wrong. I did want you to like me. Why, in my day, it looked like I might be remembered as the worst president of all time. Now some say I was the best? That sure is nice. Of course, getting shot probably helped. Shot by Booth. Who, by the way, wasn't half the actor that his father was!

...What was I talking about? AH! Symbols, America, can be useful tools. But beware of those who would have you used by them! Some of their symbols are pictures, some are familiar phrases, some mere gestures. They are all designed to steal your hearts, America, but care little for your minds. It is your duty to assign both organs to attend them.

Otherwise, dear friends, there may yet come a day when a red, white and blue rectangle of weather-beaten fabric hoist upon a metal pole may be raised in importance high above the freedoms it once so humbly represented."

All of which is to say that sometimes waffles n' bacon are just waffles n' bacon, to mangle Siggy Freud, and that one might want to be aware of how beholden one is to a symbol as opposed to the ideals it purports to represent. When breakfast offends you it's safe to say that you might be taking things just a liiiiiiiiittle too seriously. 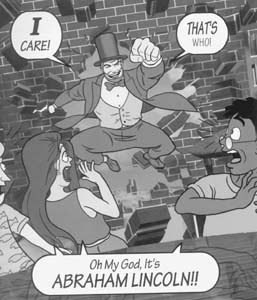