In Praise of the Goofy Undead 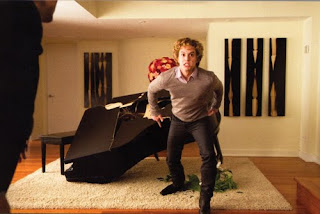 Tonight I'll have the pleasure of escorting The Lovely Wife to a screening of Eclipse, the next in a seemingly never-ending series of movies about Glittery Vampires, Shirtless Werewolves, and the terminally-boring women who love them.

These movies make me laugh. Not in the meanspirited, dismissive sense, but in the goodnatured, along-for-the-ride-in-a-dark-room-filled-with-quite-literally-squealing-women sense. I recognize precisely why this series is so popular, and I recognize that my gender makes it impossible for me to connect with it in the same way that so very many women have connected with it, but that doesn't mean that I can't enjoy the films in my own way: as comedy. One of the best comedic moments of the decade involves Kristen Stewart, Robert Pattinson, some wirework, and an utterly-hilarious, Looney Tunes-style run through the forest.

These films are Goofy (capital G intended), and I mean that in the best possible way. This quality is best exemplified for me by Jasper, a character that I'm dangerously close to flat-out loving based on his scant minutes of screentime so far, and on the most ludicrious facial expressions I've ever witnessed in a "vampire" movie. I'm told that Jasper and his VERY LARGE EYES play a much bigger part in the story of Eclipse, which has me genuinely excited for it. That, along with reports of a weird, uncomfortable scene involving a tent, a shirtless werewolf, a very cold, very boring woman and a voyeur vampire have me anticipating a great time at the theater tonight.

Please do not misunderstand me: I am not making fun of anyone who enjoys the Twilight series unironically. I admire your passion, and I'm frankly thrilled that so many women have found a series of books/films that encourage them to "geek out" with all of us nerdy boys. Lord knows that I've enjoyed films, shows and books that are definitively terrible - far worse than this Twilight business - so I'm in no position to judge anyone based on what they do or don't like. Never be ashamed of genuinely enjoying something - that's my philosophy. And if you hear me chuckling away in your theater as The Most Boring Yet Also Apparently Most Desirable Woman In The World is fought over by two guys who should really just take each other home and have Glittery, Furry gay sex? Well, know that I'm loving it just as much as you are. Viva La Jasper!
at June 29, 2010